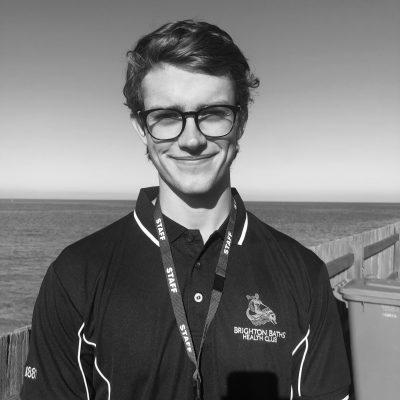 Fitness, wellbeing and celebrating good times are traits that Carl builds his life on. He believes there is no better feeling than having a swim in salt water and letting life’s stresses escape with every stroke.

Carl graduated from Scotch College in 2014. Since finishing school he has explored many different jobs within hospitality but has decided to go back to university studying a business degree, majoring in Management and Accounting. He is interested in starting his own business but is finetuning ideas for the future.

In his spare time, Carl enjoys playing tennis with grass being his specialty surface. He frequently goes for long runs by the beach to get the endorphins going and also loves going to the gym.

After spending a lot of his childhood visiting his grandparents in Brighton, Carl is lucky enough to move into the bayside area and looks forward to building a great network at the baths and being a friendly face that people can approach at any time.